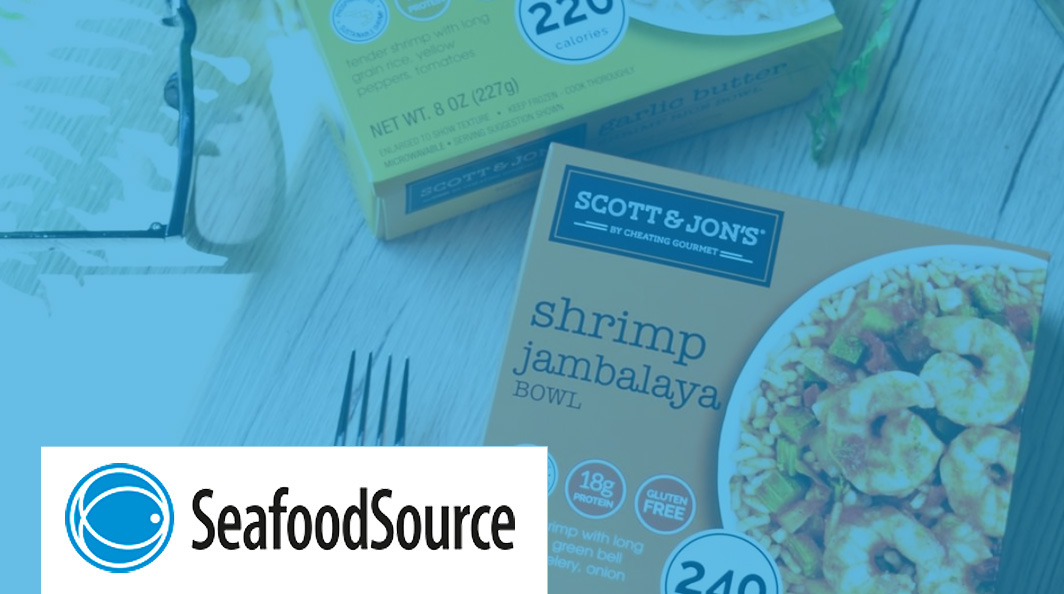 A small frozen seafood meals company has quickly grown in two years to now have its product in major grocery stores across the United States.

The fast growth of Auburn, Maine, U.S.A.-based Scott & Jon’s (formerly Cheating Gourmet), which recently announced it is being sold in Target stores in addition to other major retail chains, can partially be attributed to a USD 1.3 million (EUR 1.2 million) investment from Arbel Growth Partners in May 2018.

The supplier, which utilizes Best Aquaculture Practice’s (BAP)-certified shrimp in its meals, also garnered a lot of buzz at Seafood Expo North America in Boston, Massachusetts, in March, where its Shrimp Ramen Noodle Bowl was a finalist in the “Best New Retail Product” at the expo’s Seafood Excellence Awards.

“Our Shrimp Scampi Pasta bowl has been enormously successful since its launch. We attribute some of that success to the fact that it’s so delicious, but also a very popular and familiar way to enjoy shrimp,” Scott Demers, co-founder and co-president, told SeafoodSource

“As two brothers growing up in the heart of Maine, we learned that the best way to feed a hunger for all that life has to offer was to make the most of land and sea. Our lives were fueled by seafood dishes,” he said.

The brothers saw a need in the market for “high-quality, heat-and-eat meals.”

“We’re really proud of our products. They provide the taste you want – without the calories you don’t- all in under four microwave minutes,” Demers noted.

The supplier started with a variety of frozen shrimp and rice bowls in select retailers in 2017. Those products and the new pasta/noodle bowls are geared towards millennials and others seeking healthy, convenient foods, Demers said.

“While we do hope to appeal to millennials, we aren’t exclusively focused on them. It’s really about any consumer looking for transparency, ease-of-use and great quality,” he said.

“It yields shrimp with the fresh taste that reflects our goal of providing the healthiest seafood possible, for people and our planet,” he said. “We’re incredibly proud of the quality and integrity of the shrimp we use.”

Now, Scott & Jon’s seafood meals are available at Target, Costco, Safeway, Albertsons, Hannaford, and a number of other grocery chains across the country. The bowls retail for a suggested USD 4.99 (EUR 4.44) each.

Moreover, to meet the increased demand, Scott & Jon’s strategically qualified co-manufactures across the U.S. “that allow us to supply our customers with the highest quality products,” Demers said.

Scott & Jon’s is in the process of developing new products and its founders aim to diversity its seafood offerings.

“We’re exploring a variety of white fishes and potentially salmon, but haven’t made any final decisions yet,” Demers said.

The founders are also brainstorming new flavors that play on favorite shrimp dishes, such as Shrimp Pad Thai, Demers added.